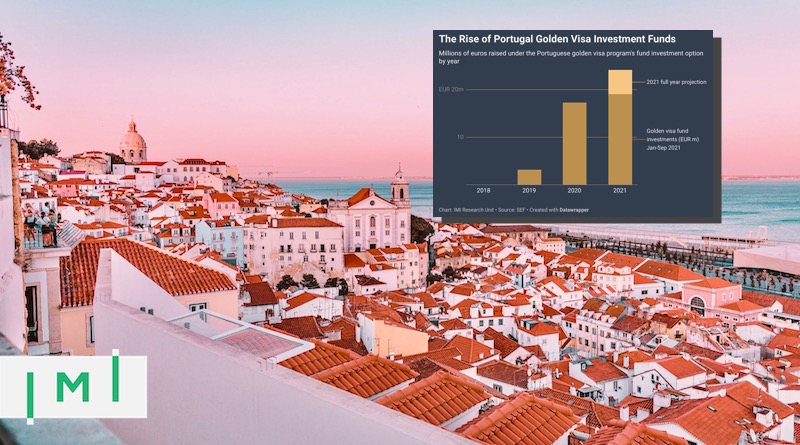 Portugal’s Golden Visa After 2021: The Market’s Next Growth Areas

I wrote an article back in June 2019 about the EUR 350,000 funds route being the next growth area for the Portuguese Golden Visa market. Back then, everybody was suspicious and thinking: ‘’What is Hakan saying?‘’

In reality, these were predictions based on experience. We are not from Portugal, but we have been managing investments for the last 20 years in multiple markets and have been noticing a pattern. Any FDI program based on citizenship and residency starts with real estate because it’s the low-hanging fruit. But then, after a couple of years, it opens the way to fund investments, real business investments creating jobs, and attracting capital into the capital markets.

That’s the way the business usually evolves, so it wasn’t a prediction really. It was just what we have expected to happen

The fund option’s ascent was inevitable

So that was our prediction. We said it would change one day, and we should be the first ones to move in this direction. So, in 2017, we structured our first fund. Our first Golden Visa eligible fund, LIG1, managed by Lynx Asset Managers, had only 16 investors and EUR 8 million in equity.

While the total investment made was substantially smaller than our future fundraising efforts, the proof of concept was there. Our experiment paid off and we decided to go all-in on the fund investment route. While we were doing our initial test, there were no direct competitors as this was before the reduction of the minimum investment from EUR 500,000 to EUR 350,000 for the fund route, back in 2018.

But then, in 2018-2019, our second fund, NEST, was able to raise EUR 52 million euro – during the pandemic – from 149 investors. So, things have started to change very quickly when we have been able to show the market that it worked. But it took two years, give or take, for the market to accept that this route was something to consider.

And, as we had predicted, the government made the announcement of some changes in the Golden Visa program three years later to enable the program to have a more widespread effect on the economy. While we were making trails with NEST, we started seeing some additional action with 3-4 funds competing in the same markets in which we were doing fundraising.

We believe this was a good decision on the part of the government. At the end of the day, the program in its current form helped a lot of contractors and developers make money and created some jobs but the impact was limited to a few players making revenues on the program.

This change came as a shock and a surprise to many people in the business. But not to us. So, in retrospect, it’s safe to say our initial predictions materialized and, when we look at the total competition trying to get their hands on the GV-induced FDI for their funds, we can see the market is starting to become a red-ocean, with 35-40 funds competing, while the CMVM is in the process of approving at least three times as many.

Now, let’s talk about what I predict for the coming two years.

First of all, I believe the fund route will continue to grow and will attract more and more investment. And, of course, the share of this route will increase at a steady pace.

Second, in the Golden Visa market, the touristic apartments business will gain popularity, but it will be much more regulated than before. We will see real touristic apartment projects emerge, but also the so-called touristic apartments, which, in reality, will be residential projects converted by developers just for the sake of selling apartments. These will remain serviced apartments in name only and will run into regulatory trouble sooner than most people expect.

While most competitors converted their residential sales business into a fund, we went the other way to become compliant with city-center investments that still qualify for the GV. We truly believe our brand Prima collection will be performing in the service-apartment business, not only in Portugal, but also outside Portugal. So, our strategy is to make this hospitality brand a success and, as a result, create value for Golden Visa investors.

So, I expect that the future Golden Visa trends will target touristic apartments on the one hand and venture capital funds on the other. Those two markets are the ones where we’ll be very present in the next three years.

In recent years, we’ve been quietly investing in and developing multiple enterprises in the background to combine the best of two worlds for the Golden Visa. And right now, we are uniquely situated to become the market leaders for a previously undefined segment. We have three enterprises forming the backbone of the future-proof system we have built:

With the combination of these three unique competitive advantages, we are establishing the future of Portuguese Golden Visa investments.

The other segment of the market that will also thrive in the coming years will be residential real estate in less populated and rural areas (EUR 280,000 apartment investment minimum). It will also continue to become one of the main drivers of the Golden Visa.

However, in these rural investments, it will be very difficult to create value for investors. Therefore, it will still be driven by the intermediation industry. But those companies who “get it right” have the capacity to process a substantial amount of investors while creating value for low population density regions as well as

All in all, I predict that Golden Visa-related investments will be distributed into one-third investment funds, one-third touristic apartments, and one-third rural residential investments.

To conclude, we’ve noticed that the industry is becoming more professional, with an increasing number of blogs, research, and transparent data being published. My advice to both investors and immigration consultants is to select the right products for the long-term within sustainable sectors.

Because of that, we will start seeing the demand shifting to better products that can deliver better returns, and, in the end, the market’s performance will greatly benefit from this increased transparency.

In any case, the Portuguese people will be the ultimate winners because more capital will enter their capital markets. More money will be invested into high-employment building niches like serviced apartments. So, the entire hospitality industry will benefit from this, just in a more professional way than before.

And, finally, there will be more investments in rural areas. So, even though the shift has been considered a threat for the industry, in the end, not much will change in the medium or long term. We shouldn’t be afraid of these changes, which will come into effect at the end of this year.

On OptylonKrea’s side, we have spent the last year getting ready to face the legislative changes. We are predicting a steady three years of growth for our company, and we are keen to share our philosophy and experience with anyone interested. After all, I think the most important thing is to aim for global and sustainable growth in the industry. This is how Portugal will remain competitive internationally. And I think the only way to attract more capital is to work on delivering real services and great returns to our investors.

Be warned. The Golden Visa is important, but not as much as the investment you make, because you can get a Golden Visa through different routes, but you can’t preserve the capital of your family in all of them. This may seem overwhelming but rest assured; our team is there to provide you with the best advice for your investment. We can propose different alternatives based on how much risk you are willing to take and what level of returns you expect to receive.