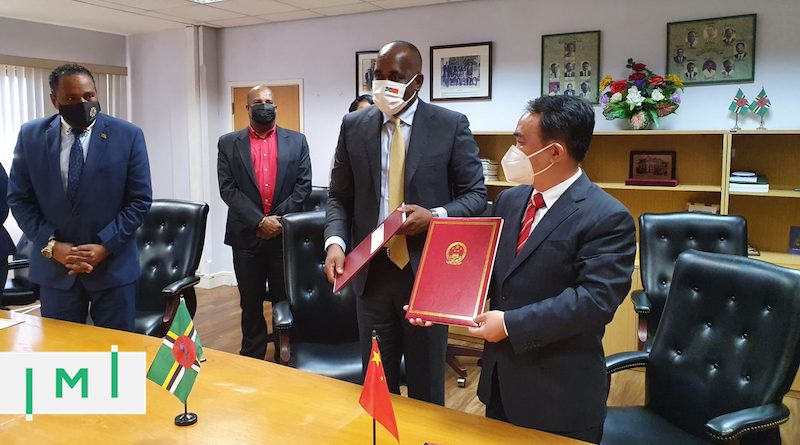 During a meeting yesterday in Roseau, Dominica’s Prime Minister Skerrit and Chinese Ambassador Lin XianJiang signed a visa-waiver agreement between the two countries, making Dominica the second CBI-country (after Grenada) to gain visa-free travel to China for its passport-holders.

Dominicans can now travel to a total of 144 countries without arranging a visa in advance, including, as WIC News pointed out, four out of the world’s six largest economies (China, Germany, UK, and France).

Calling it a “significant milestone in our diplomatic journey”, Prime Minister Skerrit said he looked forward to an extended friendship with China.

“This is significant on many levels given that China is the fastest rising economy in the world and a market that every business wants to engage,” said Caribbean CBI specialist Kenneth Green of Advance Global Partners.

“It also signifies the explicit opening of a gateway between the two countries for trade, tourism, and other avenues of cooperation. In Chinese parlance, it is truly a win-win.”

He characterized the agreement as an endorsement of the Dominican government’s long-term goal of deepening ties to China.

“I would not look at this from a CBI angle but as a path for seamless economic bi-directional flows. From there all the other benefits will follow.”

Barely noticed amid the flurry of excitement was Bukele’s confirmation of his previous plans to open a residence-by-investment program with a path to citizenship in five years in exchange for a US$100,000 investment. This summer, when it became clear El Salvador would become the first country to make bitcoin legal tender, Bukele had indicated he planned to open a residence-by-investment program requiring a minimum of ฿3. At the time, that amount of bitcoin roughly equated to US$100,000, and we questioned whether he really meant to fix the price in bitcoin, rather than in dollars.

During his appearance over the weekend, however, Bukele appeared to confirm that the program, which he called “citizenship by investment” with a five-year term, would require a minimum investment of US$100,000; not ฿3, which, at the time of this writing, amounts to some US$169,000.

Moreover, the new Volcano Bonds – Bitcoin City will be powered by the nearby volcano – will be a qualifying investment for the residence by investment program. When it’s issued next year, the USD-denominated bond will have a coupon rate of 6.5%, about half the yield El Salvador’s 10-year treasuries are trading at today. Following five years of legal residency, the investor will be eligible for citizenship.